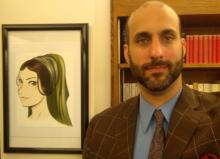 Renaissance French literature and culture. His research and teaching interests include Reformation theology, gender, rhetoric, and print culture. His first book, Advertising the Self in Renaissance France: Lemaire, Marot, and Rabelais, was published in April 2019 as part of the Early Modern Exchange Series of the University of Delaware Press. It describes how printed editions of Lemaire de Belges, Marot, and Rabelais anticipate modern advertising techniques in their use of rhetoric and self-fashioning to represent the author and reader. His current research projects include a book project, tentatively titled The Ethics of Indifference, on adiaphora and scandal in the works of Marguerite de Navarre and the Circle of Meaux, and The Digital Heptaméron/L'Heptaméron Numérique, a comprehensive digital transcription of all surviving sixteenth-century manuscripts and printed editions of the Heptaméron. He is the author of articles on Marguerite de Navarre, Rabelais, Montaigne, and Jodelle, and he regularly teaches FREN 231 and 232 (Approaches to French Literature) and COML/FREN 200 (The Fantastic Voyage from Homer to Science Fiction), a freshman seminar that situates speculative fiction within the western literary tradition. His graduate seminars have focused on alterity, gender, and polemics in Renaissance France. He also recently founded the Société Marguerite de Navarre/Marguerite de Navarre Society, an informal association of scholars currently working on or interested in Marguerite, her network, and her historical and cultural influence.